THE REAL TRICK: TURNING A TEST INTO A GAME

“It’s still magic even if you know how it’s done.”
― Terry Pratchett

Over my rather long career as a teacher, I believe that I have received what I would consider the greatest compliment my students could ever give me.

It was on the day when they learnt their final test results. I still remember their faces beaming with joy and excitement. They were filled with wonderment and sense that they were experiencing the impossible.

“Wow! We have all passed! And we did not even study properly! We played games all the time!”

Well, not that I was entirely happy to hear my students “did not study properly”, yet it felt as the best compliment. My thoroughly planned magic worked well – I managed to pull the rabbit out of the hat leaving my “kids” in awe that even though they were so close to the stage watching my every move, they were still unable to see how the trick was done.

From numerous research in psychology and neuroscience we know that learners are more likely to enjoy learning and actually learn when activities are meaningful, fun and interesting.

Yet, again and again, we have no other choice but to ‘test out’ much fun of learning. Under pressure to perform well in a test, students focus not on learning for the sake of their development and stretching their existing abilities but rather on learning to be able to pass a test. Now, what can we do to get them to change their focus? One of the possible solutions is to change the process itself and assess students’ knowledge while they are engaged in playing a game.

“There is no trick in getting the rabbit out of the hat; the real trick is getting it in there in the first place.”

Today I’ll describe a few options how a teacher can embed a test in a game, or, so to speak, “get the rabbit in the hat”. 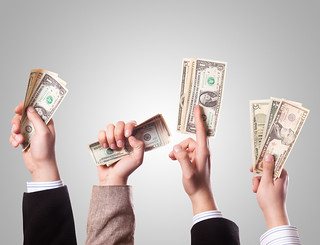 Before the game:  this game will not require much preparation. However, in the ideal scenario, you should probably reformat the test to leave some space for placing bets:

How to play: The principle of the game is simple. Students do test assignments – gap fill, correction, etc. – and place bets on their answers. Tell students that they have €1,000, and they should place a bet on the sentences (points) they think are correct. If they are right, the bet will double. If they are wrong, they lose the money. The winner is the one who earns more money.

With this game you can have students brush up on any grammar or vocabulary pattern and assess their level of knowledge at the same time. It works with speaking topics as well. Students may place bets on the length, or vocabulary variety, or grammar accuracy, and then deliver a speech while the rest of the group will be assessing them with rubrics, or other assessment tools. The assessment, however, will not be in traditional scores – it’s all about the money.

With this game, you can gain information on the level of progress achieved by individual students. After the game is over and profits are counted, collect students’ betting sheets for “audit” purposes to get a better insight and plan your future classes accordingly. In addition to knowledge gaps, this game might provide you with the information on how confident your students are about their knowledge, which is hard to elicit through traditional testing. After all, students will place bets on the answers they are sure of.

Pair up students and have them draw a ladder on a sheet of paper. The number of rungs of the ladder equals the number of test points (if you use two test versions for Student A and Student B), or its half (if you use one test version per two students).

Ask players to put cards with challenging tasks aside. After the game is over, collect students’ “ladders”, including the cards that caused some difficulties, to study the progress of your students and provide more practice in the relevant areas, or to give some individual assignments to students, if needed.

One more option is to embed a test in a board game.

Before the game: It won’t take much of your time to design a board game if you have a good template – this template Board Game 1.0 designed by Tekhnologic will surely be a time saver. You may either fill in the spaces of the board with particular assignments, or complement the board with a set of cards for Grammar, Vocabulary or Speaking spaces with answers provided (see the Ladder Game).

How to play: Split students into small teams of 3-5 players in each. Each player in turn throws the dice. The player with the highest total starts the play. He or she places the counter on the space marked “START”, then throws the dice and moves the counter the number of spaces indicated by the dice. Depending on the space the counter reaches, the player may draw a Grammar, Vocabulary or Speaking card. The task should be read by another player. If the player gives the right answer, he or she stays on the new space, if not – the player gets back to the initial space. After the player has completed his or her play, the turn passes to the left. Two or more counters may rest on the same space at the same time. The winner is the one who reaches the Finish space first.

If you have several teams and you are not sure whether you will be able to monitor all of them, you might assign a scribe whose task will be to keep track of records, fill in rubrics for speaking challenges and collect cards that caused some difficulties.

With just a snap of fingers, poof, the test is gone.

This work is licensed under a Creative Commons Attribution-Non-Commercial-Share-Alike 4.0 International License.