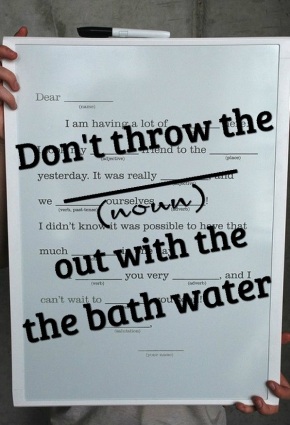 They say that in 1500s, when ‘running water’ meant the river, baths consisted of a big tub filled with hot water. The man had the privilege of taking a bath first, then the wife, and the children, and last of all the babies. By then, the water was so dirty that one could actually lose a baby in it.

This post is the baby that was nearly thrown out with the bath water – deleted from another article along with a great deal of superfluous verbiage.

It describes a few ideas based on the Mad Libs game that may save your time, maximize learning in the classroom and eventually lead to better learning outcomes.

Have you ever played Mad Libs?

As such, the game is really simple. It’s a word game where one player prompts others for words to substitute for blank spaces in a story, such as a noun, verb or adjective, before reading the story aloud. Quite often, it leads to creating a highly nonsensical and often hilarious story.

No doubt, this makes a great activity for language classes. However, the full potential of this game as a learning tool remains somewhat underexploited.

The procedure before the game usually involves making worksheets by removing a few nouns, verbs, adjectives, etc. from some text. You can find some ready-made worksheets online (e.g. to practice grammar  http://www.teachingideas.co.uk/english/madlibsstylegrammar.htm, or vocabulary, or to develop writing or speaking skills http://www.jeremytaylor.eu/books/madlibs-for-teachers/), and Mad Libs online generators.

Traditionally, it is the teacher who prepares worksheets. Then students play the game following the scenario:

Prompt for words to fill in blanks →

This surely provides good language practice. However, we can substantially increase learning by getting students to create worksheets for the game with a focus on particular vocabulary, grammar or skills. In this case, the scenario will be as follows:

Decide on words to remove and make prompts →

Prompt for words to fill in blanks →

By doing so, we add several stages that involve extended language practice to the end of better learning.

This DIY approach widens the choice of texts to play the game (and saves you the time you’d spend on making worksheets).

You can use absolutely any text for this word game:

– an opening sentence/paragraph from a fiction book

You may also widen the options for prompts. In addition to traditional prompts – verb, noun, adjective – you may use some specific prompts like ‘colour’, ‘number’, ‘shape’, ‘country’, etc., depending on the learning focus.

Pair up students. Hand out the poem and ask students not to show it to their partners (especially if you’re using one text for all students).

This Is Just To Say

Have students read the text and decide on 6 (or any other number) words they would like to remove and jot down the prompts under the words – noun, verb, or adjective.

Working in pairs, students prompt their partners for words to fill in the blanks. (Tell them that they may ask for words randomly)

Get students to read out the resulting “poems” in pairs. Ask to read out funny versions to the whole class.

Play the following video with the original poem to your students.

Get students to recite the poem putting some feeling into it and reading the poem “like you mean it”.

As an extension, you may ask students to write their own ‘this is just to say’ poem to their friends and leave/record it as a voice message. 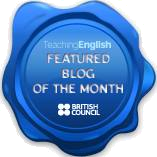 This work is licensed under a Creative Commons Attribution-Non-Commercial-Share-Alike 4.0 International License.